By LM Shyba and CD Evans

A Young-Adult novel based on "5000 Dead Ducks: Lust and Revolution in the Oilsands"

In this Y/A RomCom, environmental science grad Maeve Wong goes to work for Real Rush Energy, expecting to be in the lab combating climate change. Instead, she is sent out to the oil mines camp to chase wildlife away from the oil mines Tailings Pond. An international outcry about dead ducks ensues, creating endless construction delays on the Freedom North Pipeline. The characters get swept up into staging a bogus revolution with a group of unscrupulous lawyers to banish the ‘enviro-types’ and take over the Oil Land government. One love of Maeve’s life lusts for activism and justice, the other believes in resource exploitation at all cost. She has to decide whose side she is on.

Ducks Redux is based on the 2011 novel by CD Evans and LM Shyba, 5000 Dead Ducks: Lust and Revolution in the Oilsands. Written almost a decade ago, 5000 Dead Ducks forecast pipeline construction holdups, international outcries about carbon emissions, a separatist uprising, and a even a devastating wildfire in the neighbourhood of the oil mines. This prescient story has received a mighty rewrite for young adult (Y/A) readers. Ducks Redux is now available as an e-book, an audiobook, and a limited-run print edition. View illustrations & excerpts  >>

In no particular order, LM (Lorene) Shyba has been an entertainment impresario, magazine and book publisher, advertising art director, TV talent, digital art curator, university professor, and rancher, among other things. She was the innovator of the interactive performance piece Spies in the Oilsands and the serious videogame The Pipeline Pinball Energy Thrill Ride Game, which, together with her dissertation, won the J.B. Hyne Research Innovation Award from University of Calgary. She is currently publisher at Durvile & UpRoute Books.

Christopher D. Evans QC practiced criminal law in Canada for fifty years and is a Fellow of the American College of Trial Lawyers. He was a Bencher of the Law Society of Alberta and was appointed Queen’s Counsel in 1978. Evans’ published titles include Milt Harradence: The Western Flair; A Painful Duty: Forty Years at the Criminal Bar; and Less Painful Duties: Reflections of the Revolution in the Legal Profession. Along with LM Shyba, he penned the controversial novel 5000 Dead Ducks: Lust and Revolution in the Oilsands, upon which this book is based. 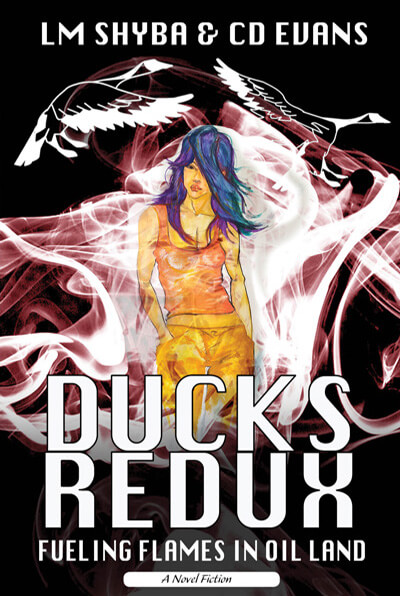