Take a listen to Chapter One of Lillian & Kokomis. Narration by Maeve Wills. 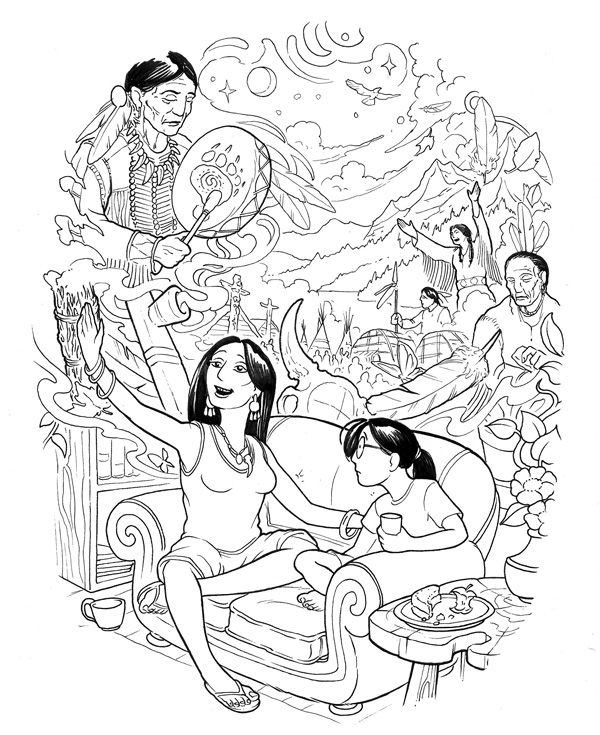 Lillian was eleven years old. She felt like she was a pretty old person already and should be making decisions for herself. The shove against her backpack by her social worker told her otherwise. Mrs. Beasley, her social worker, pushed her up the sidewalk to another new ‘home’. Lillian rolled around in her mind, Oh no, not another home. Out loud, she defiantly yelled, “I want to decide for myself where I want to live.”
Mrs. Beasley spun around and hiss-whispered. “Lillian, you don’t know what’s good for you yet, you’re only eleven!”
“And you don’t know anything!” Lillian hissed right back.
Lillian tried to slow things down by dragging her feet and rubbing the toes of her sneakers on the stone sidewalk. This didn’t really slow Mrs. Beasley down at all because she was used to Lillian and her determination to rule her own world. She just shoved against the backpack a little harder.
Lillian felt a funny lump in her stomach that she always got when she was being taken somewhere new. She wasn’t going to cry though, because that would make the bossy adults think she had no control over her world. I’m not going to cry. I’m not going to cry, she mumbled to herself over and over. She might have to follow Mrs. Beasley into the new home but she wasn’t going to make it easy.
The door opened at the top of the stairs and there she was. A smiling woman standing in the doorway, just like always, Lillian thought. But Lillian knew not to be fooled. This was her sixth ‘new’ home. She didn’t cry this time. Instead, Lillian kept staring at the sidewalk. She dragged her feet as slowly as she thought she could get away with. She knew what to expect. The ‘new’ woman came partway down the stairs, took her hand and tried leading her into the house.
“I’m not a baby. I can walk by myself!” Lillian shouted as she yanked her hand away from the woman and stomped up the big stairs to show that she was in charge, not these old ladies. “I am the boss of me, not you,” she yelled.
Lillian gave a large loud sigh and said, “Ugh, this is just the same as all the other houses. Seriously you two, do you think I’m stupid enough to believe this ‘home’ is going to be different?” She looked down the hall, to see where her room would be.
Mrs. Beasley said, “Lillian this is Mrs. Flagstone. She will take care of you. I have to go now, but Lillian, how are you feeling ...?”
Mrs. Beasley wasn’t able to finish her sentence before Lillian spun around and interrupted her, “Darn it, none of you ever listen to me so why should I bother to tell you how I feel.” She pulled her baggy sweatshirt closer to her body and tried to hide inside it as Mrs. Beasley gestured to wave goodbye.
The lump in her stomach was making her feel sick and the last thing she wanted to do was look up or say goodbye to Mrs. Beasley. I won’t throw up. I won’t puke. I won’t barf, she said under her breath. She stood rooted to the floor unsure just what to do now. Those first few minutes, hours, and days in a new house were always terrifying until she learned the rules for the foster kid, which, as it happened, was always her.
When Lillian’s mind finally calmed down and felt that the floor had been studied enough, she gave Mrs. Flagstone a few glances. Even at a quick glance, Mrs. Flagstone looked much different than the other women in the houses where Lillian had stayed. She had long black hair and a really dark tan and wore long earrings made from coloured beads. There were shiny silver rings with bright blue stones on her fingers, and strange animal teeth or claws around her neck. Weird alright, thought Lillian.
Mrs. Flagstone asked Lillian patiently, “Are you ready to come into the living room and sit down? Or would you rather explore the house a little more on your own?”
Mrs. Flagstone didn’t seem to mind that Lillian was rooted to the floor, unable to answer. She didn’t tell her to get moving and didn’t ask her what was wrong with her. She didn’t make fun of her glasses or her baggy clothes. Most people made fun of her when she went to a new home.
Mrs. Flagstone smiled a lot and Lillian noticed there was no Mr. Flagstone. Lillian decided it would be okay to go and sit on the couch for a while so she told her legs to carry her to the couch and they obliged.
Well I guess I’m tired so sitting is okay with me. I’ll sit for a little while, she said to herself. Then she raised her voice and said to Mrs. Flagstone, “I’m sitting because I want to. Not because you said I have to.”

About Lynda Partridge. Lynda is a member of the Algonquins of Pikwakanagan First Nation. She grew up in the child welfare system and spent her childhood in numerous non-Indigenous foster homes. At a later age she obtained an honours Bachelor of Social Work (Native Human Services), followed by a Masters of Social Work Degree. It was while obtaining her undergraduate degree that she found her birth family and reconnected to her Indigenous culture. This experience led her to the field of Indigenous child welfare.