We Remember the Coming of the White Man, Special Edition in Recognition of  the 100th Anniversary of the  Signing of Treaty 11.

By Elizabeth Yakeleya, Sarah Simon and other Sahtú and Gwich'in Elders
Edited by Raymond Yakeleya and Sarah Stewart; Foreword by Walter Blondin

Dene Elders tell the history of their times

"I hear so much power in these pages. I also feel it." —Richard Van Camp

We Remember the Coming of the White Man chronicles the history of the Sahtú (Mountain Dene) and Gwinch’in People in the extraordinary time of the early 20th century. This 2021 Special Edition of the book recognizes the anniversary of the signing of Treaty 11, which is greatly controversial due to the emotional and economic fallout for the People. The remastered film “We Remember,” is included with the book, on DVD and as digital Vimeo links. As well as poignant essays on Treaty 11, the book includes transcripts of oral histories by Elders. They talk about the early days of fur trading and guns; the flu pandemic; and dismay about the way oil and uranium discoveries and pipelines were handled on their land. A new section of stories is included as well — stories by Leanne Goose, Antoine Mountain, Raymond Yakeleya, and George Blondin.

Author royalties for this edition are being used to create a scholarship for an emerging Indigenous writer in conjunction with Northwords Writers Festival.

Now deceased, Elizabeth Yakeleya (nee Blondin) a Sahtu Willow Lake Dene, was born in 1906 in Norman Wells (Tlegohli) and was educated at the convent in Fort Providence (Zhahti Koe). In 1925 she married Johnny Yakeleya and they had twelve children.

Now deceased, Sarah Simon, Gwich’in, was born in the Delta on the Mackenzie River (Deh Cho) in 1901. She married James Simon, who was later ordained an Anglican minister. Sarah travelled with James to Yukon as a missionary and served her people for many years as a mid-wife, nurse and interpreter. She translated for government officials, doctors and for her Chief, Johnny Kaye. In June 1982 she received the Commissioner’s Award for her service to her people and community. Sarah Simon died in 2001. She was 100 years old.

Author of The Tree by the Woodpile, Raymond is an award-winning Dene television producer, director and writer, originally from Tulita in NWT, now residing in Edmonton. His award-winning documentary films including We Remember for CBC and The Last Mooseskin Boat for NFB have screened at festivals around the world.

Sarah Stewart is a writer who lived for many years in the Northwest Territories. She and her husband Bill Stewart were part of Raymond’s team for the production of Raymond Yakeleya's 1976 film "We Remember."

Walter Blondin is a pilot, hunter, and trapper who worked his entire life in the energy industry. He loves his land and people and cares deeply for the spirituality, principals, and values of the Sahtù Dene.

Colette is Red River Métis and Chair of the Canadian Federation of Library Associations Indigenous Matters Committee. Poitras believes libraries have a duty and the privilege to partner with Indigenous community to preserve and revitalize Indigenous languages.”

Leanne Goose is from Canada's Western Arctic town of Inuvik, Northwest Territories. Her art is a transcription of the social and cultural mapping that guides her quest to tell the truth. Her stories are written using words in Dene and Inuvialuktun that reflect her connection from the Arctic Coast through the Mackenzie Valley.

Antoine Mountain is Dene, North American First Nations, originally from Rádeyı̨lı̨kóé (Fort Good Hope) in Canada’s Northwest Territories. Born to a very artistic family, he grew up around their crafts – sculpting, beading, sewing and even quillwork. Later, he forged his own visual practice through painting, attending art school in Toronto and learning abroad in Florence, Italy.

The late George Blondin was a writer, a wilderness guide, a miner, and trapper. His books include When the World was New and Yamoria, the Lawmaker. 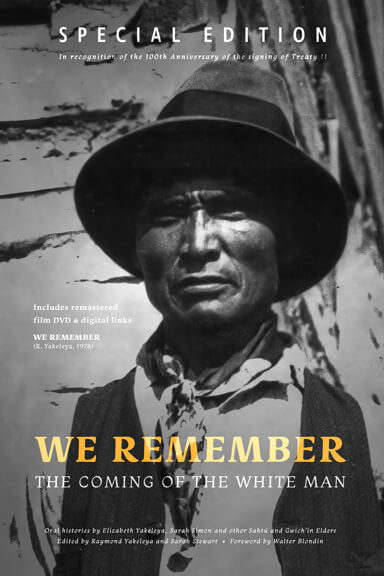