Umbilicus: Poetry and Visuals of the Sensuous

By Carrie Schiffler and Johanna Stickland

Umbilicus is a meditation on sensuality, sex, blood, hunger, and the sweet ache of shame’s hangover.
Carrie Schiffler is an actor, writer, and former exotic dancer.
Johanna Stickland is a photographer, painter, poet, and former fashion model.
Both are smitten by the female form, intrigued by unpolished beauty and drawn to dark pubs and radiant beings equally.
Not only do they share similar interests, they also share DNA. Carrie and Johanna are mother and daughter.
Umbilicus is their gift to one another and to those who wish the experience. Read excerpts  >>

Carrie Schiffler is an actor who writes. Her one woman show Tabitha, A Girl and Her Box depicted the three years she spent table dancing across Canada. When not writing or performing her own work, Carrie works in film and television on production such as Murdoch Mysteries, Heartland, Bad Blood, and Northern Rescue (Netflix). Her poetry has been published in Instant Anthology, Spare Change, Bemused and Downtown L.A. Life.

Johanna Stickland is a Canadian painter, photographer and writer based in Portugal. Johanna’s painting and photographic work has been featured in numerous publications including Girl on Girl: Art and Photography in the Age of the Female Gaze, EXIT Magazine, Vision Magazine, and Metal Magazine. Her work is held in collections across the world including Australia, France, Canada, the United States and Germany. 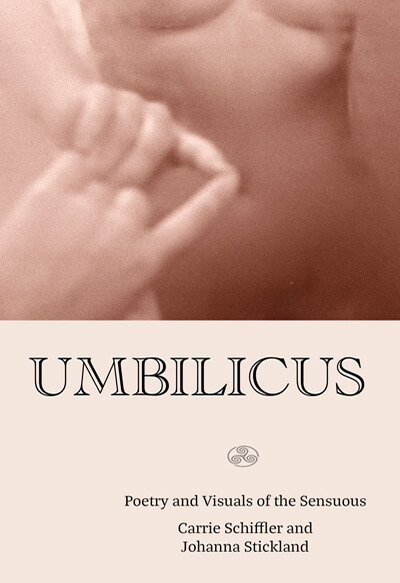