Like other books in the True Cases series, More Tough Crimes provides a unique window into the world of criminal justice. These stories are ‘tough crimes’ because of the emotional demands put on the judges and lawyers involved. Many cases in the book are recent, but some from the past were so disturbing that even decades later, they resonate in the public consciousness.

Donald Bayne on Senator Mike Duffy’s trial as media spectacle and post-truth.
Brian H. Greenspan on the case of hockey agent and promoter Alan Eagleson.
David Bright on a tale of intrigue spanning extradition from India to Nova Scotia.
Mona Duckett on a Mr. Big sting that leads to youths’ false confessions to killings.
Brock Martland on covert operations behind the notorious Surrey Six murders.
Faith Finnestad on the twisting, turning, and unravelling of a crime of passion.
Brian Beresh on gender discrimination hindering several quests for justice.
Breese Davies on the Inquest into the self-strangulation death of Ashley Smith.
Jonathan Rudin on an Inquest into the tragic deaths of Aboriginal youths.
Alan D. Gold on the murder of a criminal lawyer and bogus lip reading evidence.
James Lockyer on the wrongful conviction and acquittal of Steven Truscott.
James Ogle on the trial of a store owner who shot and killed a robbery suspect.
Clayton Rice on a murder resulting from a man’s delusional mental disorder.
Raymond Wyant on a vicious murder and rape case that changed his life.
Joseph Di Luca on funny and sometimes tragic stories of inmate appeals.
William Trudell on the trial of the contract killer of the wife of Helmuth Buxbaum 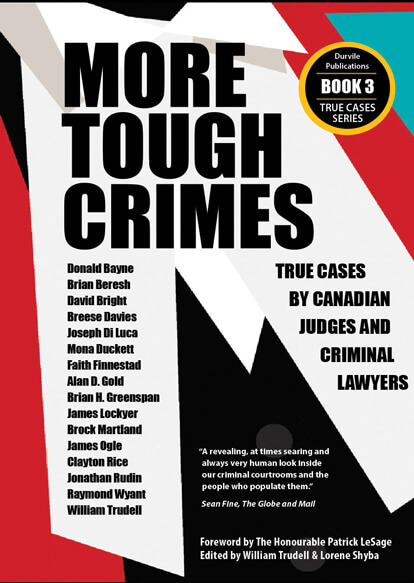