Authored by many of Canada’s most eminent women judges and criminal lawyers, Woman in Criminal Justice: True Cases By and About Canadian Women and the Law is the fourth book in the Durvile True Cases series.
Women in Criminal Justice presents women’s perspectives on crimes involving terrorism, drugs, sexual assault, and mental disorders, as well as motherhood, child protection, LGBTQ+, immigration, Indigenous, and other urgent issues of our times.

Hon. Susan Lang on flawed forensic evidence
Hon. Nancy Morrison on a horrendous case of sexual abuse
Hon. Lise Maisonneuve on the emerging role of women in criminal law
Hon. Danielle Côté on the pressures of Judging
Hon. Iona Jaffe on the Toronto 18 terrorism case
Senator Kim Pate on the plight of an Indigenous woman in prison
Jennifer Briscoe on the Fly-in Squad in Canada’s far North
Catherine Dunn on Indigenous victims of domestic violence
Kaysi Fagan on a woman caught in the world of drug trafficking
Deborah Hatch on the ubiquitousness of wrongful convictions
Karen Hudson on people in the gallery of criminal justice
Barbara Jackman on immigration and human rights
Lucie Joncas on interacting with a population at risk
Susan Kyle on being a Crown and a mother
Jill Presser on the fight for LGBTQ+ justice
Rosellen Sullivan on a 13-year-old’s loss of innocence
Jennifer Trehearne on interaction of courts and mental disorders 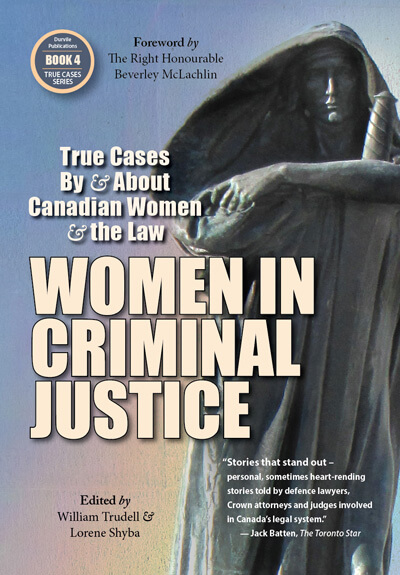